The Tarsal Tunnel is a region on the inner part of the ankle, just below the ankle bone (the “medial malleolus”). It’s formed by a thick ligament over the top and the bones of the ankle below. The tunnel contains several tendons, blood vessels, and the Posterior Tibial Nerve.

Similar to Carpal Tunnel Syndrome in the hand/wrist, Tarsal Tunnel Syndrome in Glastonbury, CT involves compression of the nerve that runs through the tunnel, in this case, the Posterior Tibial Nerve. The nerve can get squeezed by the tendons that also run through a tunnel alongside the nerve. When the nerve gets pinched or squeezed, it irritates the nerve, and that causes various symptoms. Learn more about treating tarsal tunnel syndrome in Glastonbury, CT on this page or contact the New England Stem Cell Institute today.

Anything that squeezes or puts pressure on the posterior tibial nerve can cause TTS, such as:

Sometimes the symptoms occur suddenly, for example, when beginning a new exercise program. More often they develop over time from repetitive use.

What are the Symptoms of Tarsal Tunnel Syndrome?

The most common symptoms include:

Symptoms are typically felt on the inside of the ankle and/or on the bottom of the foot. Sometimes, symptoms may be isolated to just one spot. They also may radiate to the heel, arch, and/or toes. Rarely, you may even feel symptoms in the calf.

How is Tarsal Tunnel Syndrome Diagnosed? 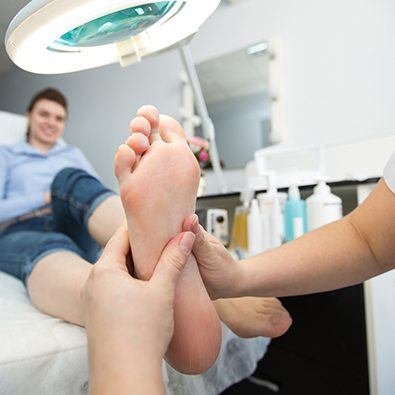 The first step in diagnosis is to take a detailed history of your symptoms and how they started, combined with a proper physical exam. X-rays may help to identify underlying problems with the joints, such as arthritis. Diagnostic musculoskeletal ultrasound can identify a swollen and enlarged nerve. An MRI is rarely needed but can be helpful to identify other potential problems. Sometimes, nerve testing, such as an EMG/NCV test (“electromyography” and “nerve conduction velocity”) can be done, but this is rarely necessary for the initial phases of diagnosis.

How is Tarsal Tunnel Syndrome Treated?

Non-surgical treatment is always the first step. Surgery very rarely is needed. Initial treatment would include:

If there is an underlying tendon problem that might contribute to the TTS, such as tendinitis or a partial tear, then that should also be addressed.

When these conventional measures fail, the physicians at the New England Stem Cell Institute may perform nerve hydrodissection treatment. This is a painless procedure where a mixture of sterile saline and a small amount of anesthetic is injected around the nerve within the Tarsal Tunnel under ultrasound guidance to help reduce the pinching of the nerve, thereby relieving any symptoms.